You shouldn't even be seeing this. Bizzeebeever told me to add this here so that we can get responsiveness working for all screens.
Jump to navigation Jump to search

Any player without a Teacher now has the option available to become a Disciple to another player.

Note that a player can only have one Teacher, whom can not be changed or removed, although there currently is no limit on how many Disciples a player can have. The term "Teacher" is a bit of misnomer, as anyone can become a Teacher without any requirements on actually teaching the Disciples anything.

They do not appear on the Friends list (all disciples acquired before the 16 April 2020 Update have been removed from there), nor are they able to send Friendship tokens nor requested cards to each other unless actually on the friendlist. Teachers and disciples can of course be friends, but that is done the normal way and is unrelated to the disciple status.

Best way is to find new players, and actually help them with advice. It is also possible to advertise through direct messages and in Chats.

Be aware that there has been a lot of "disciple-spam" since the new system was put in place, and a lot of players add any and all who post spam to their Blacklist meaning no further communication with them is possible. This can be detrimental to new players, as they exclude themselves from the help from more experienced players. Also be aware that Support will impose sanctions on anyone reported that is found to have broken the chat rules.

Examples of messages generally considered as spam.While there have always been people hunting for disciples in world chat, such a behavior considerably intensfied after the 16 April 2020 Update.
Note that the last one can also be considered fraudulent since Disciples do not get Legendary Cards and awards only one chest ever. 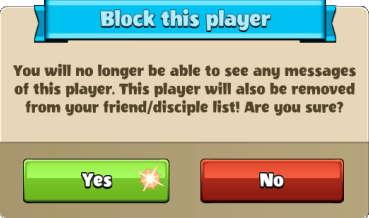 Once an ID is entered into the Teacher tab, players are unable to remove Disciples and Teachers. For a time, Support and Discord Admins could remove teachers, but as of October 2020 that is no longer the case. Despite what the Block confirmation states, Disciples are not removed when Blocked.

This leaves making a new account the ONLY way to get rid of an undesired Teacher.

Retrieved from "https://cwars.miraheze.org/w/index.php?title=Disciples&oldid=22862"
Categories:
Cookies help us deliver our services. By using our services, you agree to our use of cookies.